Unlike the malt-infused liquid that is extracted during the brewing process of beer or whiskey, the term ‘wort’ in the herbal identity of Saint John’s wort is derived from an Old English word meaning ‘plant’.

The etymology associated with this herb is actually quite gory. Saint John’s wort refers to the bright red dye released when the plant is crushed up. The herb’s coloration emulates blood, linking it to the gruesome beheading of John the Baptist. Hence, Saint John’s wort.

This herb is commonly picked on June 24th, the feast day of John the Baptist. In folkloric tradition, simply placing a sprig of this wort under your pillow on Saint John’s Eve was thought to bring special blessings and protection from death in the coming year.

Saint John’s wort has been used for over one thousand years to treat depression. It has been proposed that this herb inhibits the synaptic reuptake of serotonin, norepinephrine, and dopamine. Regardless of the mechanism, Saint John’s wort is renowned for its powerful mood-improving benefits.

In addition to being an amazing plant and powerful healer, this plant holiday falls on our owner’s birthday, so this plant is a particular favorite.

Celebrate this happy and historical herb on June 24th or, all week long! 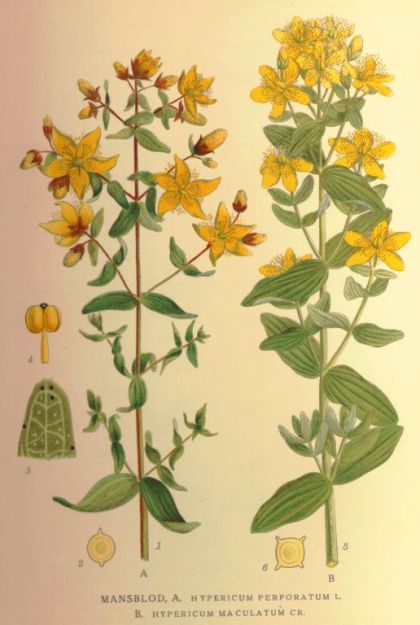 The plant, which consists of many branching stems, grows to a height of 1 to 3 feet. The pale green, oblong leaves are approximately 1 inch long and arranged oppositely along the stem (Foster, 1993). By holding a leaf up to the light, one can see tiny dots that appear to be perforations; in fact, they are a translucent layer of oil glands. The bright yellow five-petaled flowers, which are arranged in a flat-topped cluster at the end of the branching stems, are approximately one inch across and are covered with tiny black dots that release a red oil.

Sustainability Issues: None known. Considered an invasive weed in the rangelands of western North America and Australia due to its aggressive growth.

Harvesting Guidelines: The open flowers, flower buds and leaves from the top 2-3 inches of the plant are harvested during full bloom from June through August