“Red Clover, Red Clover, send Susie on over!”  Or maybe it’s supposed to be Red Rover…

Red Clover is a wonderful little gem of a plant that is so common most people don’t even realize they’ve seen it before.

It grows wild all over most of Colorado, especially in grassy fields and other areas where animals graze. It particularly likes areas above 7,000 feet but has been found growing almost anywhere in Utah, Oregon, New Mexico, and sometimes California.

Occasionally planted in fields by ranchers, it is a highly nutritious (and tasty) plant for grazing animals, as well as a nitrogen fixer, which means it adds nitrogen back into the soil.
This is particularly helpful for re-habilitating over-grazed and over-farmed land.

It is also a wonderful plant ally for increasing your overall health and vitality.

Red clover has become most famous likely due to the fact that it has been used in several different herbal cancer remedies for many centuries.

Interestingly enough, it’s action as a blood-purifier (or alterative) is probably due to its high nutrient content. If you are giving your self high levels of nutrients, your body will be healthier and more likely to fight off whatever issues you may have going on.

This isn’t to say that these remedies (such as the Essiac formula) aren’t effective, it just needs to be thought about as to why they are helpful.

In addition to being highly nutritive, it is also very tasty, and an herb that is relatively safe to drink every day; both of these aspects, along with its potential cancer-fighting qualities, are reason enough to drink some Red Clover tea every day.

Red Clover is also great for wet and mucousy coughs; it helps to expel the mucous more effectively as well as calming down the excessive cough reflex that happens when someone can’t get stuff out of their lungs.

As a member of the legume family, red clover is related to soy, and like soy, it contains phytoestrogens. Phytoestrogens can be helpful in balancing hormones, both in someone who is high in estrogen and also if they are low in estrogen. Why this is so is a much longer conversation….

Now this aspect gets a bit trickier; some would say that people with estrogen-dependent cancers shouldn’t take red clover or other phytoestrogen containing plants because of the potential to stimulate the cancer growth, yet red clover has been used for a long time as a cancer remedy…can you see where allopathic and herbal medicine might butt heads on this one?

Because of these two conflicting ideas, there is no one right answer; especially not when you throw in how different people react to plants in different ways. If you are considering red clover and you have questions about all of these, come on in and ask! We do our best to provide you with answers that consider both sides of the argument. 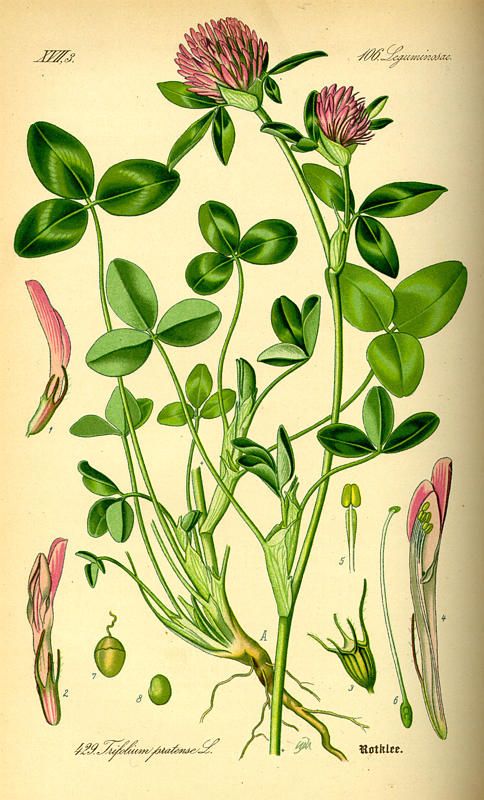 Parts Used: Blossoms with three small leaves at the base

A perennial, clover roots itself with a long taproot and rises up with a slender, hollow, and hairy stem. The blossom surfaces with rounded three-parted, and white V-embossed leaflets in a burst of purple-pink petals.

Red clover blossoms are ready to be plucked one to two weeks after first bloom, and can be harvested up to three times in the establishment year. Simply pop the blossom off, leaving the rest of the plant undisturbed.