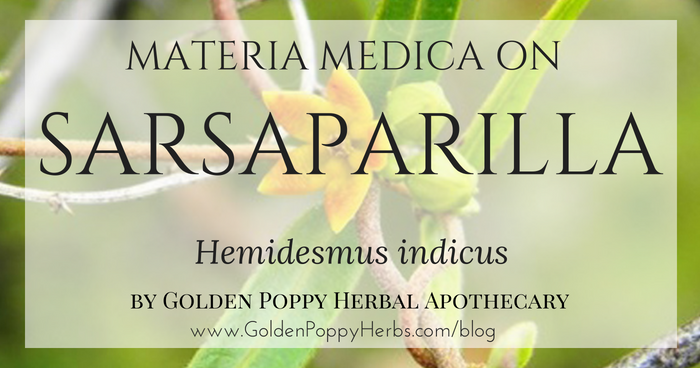 EVER WONDERED WHAT SARSAPARILLA IS? DID YOU KNOW THAT THERE ARE AT LEAST TWO DIFFERENT KINDS?

Indian Sarsaparilla is an herb of many faces. Often called “False Sarsaparilla” for its frequent confusion with the American variety.

It is a plant that packs as much punch as it has names. Known originally to the ancient healing tradition of India as “sugandi root,” it also goes by the names Ananta-mula, Anantmoola, Ananthamoola, Anantmula, Upalasari, Gadisugandhi, Gopakanya, Hemidesmus, and White Sariva—and that is in India alone! The multiplicity of nomenclature, however, attests to the popularity and power of this herb, found to be effective in various different societies.

Sugandi is a creeper vine found growing natively all over southern Asia, but it originated in India where it is still often found growing wild as farm north as the Himalayas and as far south as Kerala. It is also known to grow in Malaysia, Indonesia, and Sri Lanka. This ancient healing plant has been transported to all parts of the world and is prized by many horticulturists and practitioners of traditional medicine for its healing properties and aromatic qualities (Acharya et al. 2006).

In the Himalayas, the herb is ground to a coarse powder with dried leaves or seeds of Holy Basil, Bel Fruit or flowers of lotus (such as our 3 Lotus Paste) jasmine and safflower and then burned as a ritual incense. In traditional Tibetan medicine the roots are considered to be a sweet, delicious herb, associated with meditation and trance.

Ayurvedic texts refer to this herb as ‘the eternal root’ as its root spreads for a long way underground. The roots are called the “symbols of human mind on the earth” and look like little neurons complete with synapses and glias, believed to induce magical-spiritual dreams and help with clarity of mind. The root is said to be useful for all three doshas, balancing a variety of different energetic body types.

In Western science this root has also received attention. There are six major therapeutic uses that have been tested and shown to be effective in Western medicine: anti-inflammatory, diuretic and vulnerary, prevention of miscarriages, improves fertility, and treats syphilis. There is also significant scientific evidence that the root can be used effectively as a treatment for arthritis, asthma, bronchitis, epileptic seizures, high blood pressure, immune disorders, and high stress (Arun et al. 2007)