EVER WONDERED WHY BEER MAKES YOU FEEL TIRED?

It could be the hops.

This traditional beer ingredient has a long history of use as an herbal sedative.

A CRUCIAL INGREDIENT IN BEER SINCE THE 11TH CENTURY, HOPS WERE ORIGINALLY ADDED TO HELP PRESERVE THE BEER AS WELL AS ADD MORE FLAVOR.

IPA’s, India Pale Ales, typically have twice the amount of hops as other Pale Ales; this was done in an effort to prevent the beer from going bad during the long ocean crossings from Europe to India.

In older times, beer was often given to nursing mothers to help increase their breast milk production, as well as help the mother relax, which is also an important part of maintaining a healthy milk supply.

By itself, hops is an excellent remedy for those with spastic digestive issues, particularly those caused by nervous tension.

It is also a very strong sedative herbs, and a cup of tea with hops in it, or a few droppers of a tincture blend with hops, it sure to relax the nervous system and leave one feeling more drowsy.

Hop’s cooling and estrogenic qualities also make is especially helpful for menopausal symptoms such as hot flashes and tension.

The estrogenic qualities are also part of what make it an anti-aphrodisiac for men (meaning it decreases their sexual desire specifically as opposed to women). The sedative qualities combined with the estrogenic qualities also make beer perhaps not the best beverage to drink when one would like to feel amorous later in the evening, but it does make it the perfect beverage to help one relax at the end of a hard day. 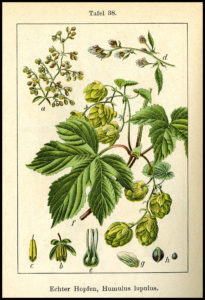 Tea – best as a part of a blend as alone it has a very strong flavor. Can be mixed with other sedative herbs for help with sleep issues, or with herbs to help increase breast milk production