Herbalism By The Moon: New Moon 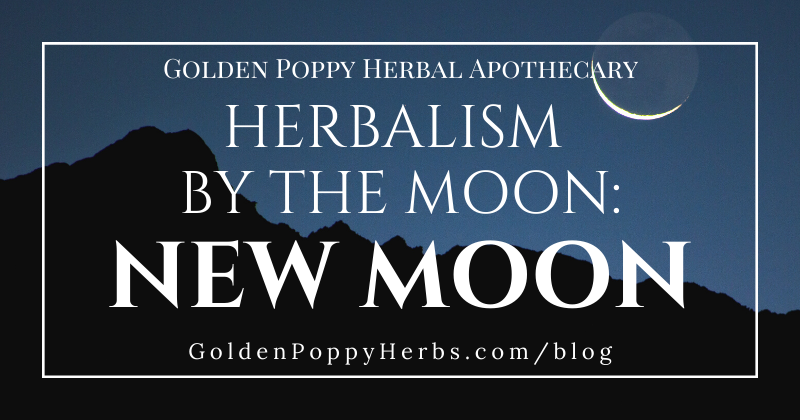 As with all beautiful chapters, we invite you to join us as we conclude the final piece of our Herbalism by the Moon series in deep celebration of the waning moon.

The Moon, as with all things in nature, moves through a cyclical rhythm, and following the culmination of the Full Moon, the waning moon is the final stage in the beautiful circle. It is much like what occurs in the natural world, when the seasons are transitioning from autumn into winter, the Moon is transitioning from extending outward production of energy to turning inward, preparing for a state of deep rest and introspection in order to yet again begin anew.

Before we begin our discussion diving deeper into the energetics of and alignment with the waning moon, we wanted to take a moment of reflection, to honor the energetics of turning inward. This series is yet another example of the beautiful ways in which nature so readily offers its gifts to us in the form of wisdom and abundant teaching, if we so choose to simply listen, and be aware. It is incredible to think about the fact that we have something like the Moon, which infallably has offered her teachings of living in cyclical flow consistently every month for millions of years. The Moon pays no mind as to whether or not we are listening, and continues her monthly routine, standing ready to share deep insight into how we can live more in a state of flow, whenever we find ourselves ready. May this be a beautiful reminder to us that whenever we may feel lost, that we have such an ancient teacher there to guide us, and know that even on the nights of the Dark Moon, that she is still there, just in one of her many forms.

We invite you to join us in honoring the conclusion of this series, as well as the seasonal energetics series that too will soon come to an end, by participating in a state of observation. How might you identify the ways in which cycles, or cyclical energy exist in your surroundings? How have you discovered that the energy of the Moon exists, or has influence upon you and your body? Have you observed such plants as Mugwort, and how the Moon causes this plant to dance, or how Mugwort’s silvery underleaves almost seem as though they were painted using moonlight as ink? In what ways might you also be able to live more in alignment with the energies of nature’s cycles, be more present, in a world that often is trying to work in a much more rigid and structured way?

We again thank you for being part of our community, and sharing as we explore these ideas and concepts together. We would love to hear more about what your journey with the Moon has been like, and your thoughts on this series. Please feel free to share your ideas with us on Facebook or Instagram!

The Influence of Lunar Energy on Earth

We have alluded to it a lot throughout the entirety of this series, but what does it mean when we say that the Moon has an influence on us here on Earth? Well, despite being essentially a giant rock orbiting our planet, the way in which the Moon interacts with gravitational energy actually has a profound impact to us here on Earth, both energetically and physically speaking!

It is likely you are already aware of how the gravitational pull of the Moon is the reason we have tides in our oceans. Each day, this energetic phenomenon is what causes water to retreat far out from the coastlines, or brings the water back in to line the beaches. However, the Moon’s impact on Earth goes much farther. As explained by Dr. Tom White, senior curator of the Natural History Museum in London, “the Moon has been up there for as long as evolution has been taking place, and lunar rhythms have been embedded in the life cycles of many organisms.” The three places in particular in which the Moon has an influence are “time, tides, and light.”

For example, the Moon is responsible for our internal circadian rhythm. And, actually, there are birds and nocturnal species that depend on the phases of the moon to migrate, safely forage at night, or for reproduction. Matter of factly, for example, if we were to somehow lose the Moon, sea turtles would be in grave danger, as they are dependent upon the tides in order to safely make it to sea upon hatching.

Additionally, we actually have the Moon to thank for the stability in Earth’s “wobble.” As explained by the Institute of Physics, the Earth is currently tilted at about 23.4 degrees with respect to the Earth’s orbit around the Sun. If we lost the Moon, this wobble, which normally only moves the Earth’s axis about 2.4 degrees and takes almost 26,000 years for a full rotation, would become completely erratic. This means that such tilts could occur in which the Earth’s axis is a direct 90 degree angle to the Sun at one point, and completely straight up and down at another. This would lead to such drastic climate change as the poles being as hot as the equator, and then freezing again when the Earth re-shifted, which would have catastrophic impacts for life on Earth.

So, while it is easy to think we are disconnected from a silvery orb of light in our sky, we have so much to be thankful to the Moon for!

Think of the Moon cycle like a bubble or balloon. The Full Moon is synonymous with the bursting, or release of the bubble. All of the energy has been moving toward this culmination point. Following the Full Moon, the Waning Moon takes on the energy of clearing or cleansing. After a period of deep focus, we take a more subtle shift, and find clarity in that which we want to ensure we move away from or clear from our path. It is with this act of intentional cleansing that we can make space for the cycle to begin anew, or continue on with new life breathed into what we are trying to accomplish.

The Waning Moon is synonymous with actions of elimination or even banishment. We can align with this phase by discerning for ourselves what it is we want to let go of fully, or remove from our journey.

At the end of the Waning moon cycle there is a brief period of time when the moon is completely dark, this is often called the Dark, or New moon. This is when the moon is between the Sun and Earth, so all of the sun’s light is shining on the side of the moon we are unable to see, making it appear to be dark in the sky, often lasting between 1-3 nights.

This is the time when the night sky is its darkest when the stars shine their brightest, and we are reminded of the power and beauty of the darkness.

When the moon is dark it offers us a pause, a brief moment at the bottom of an exhale before we begin a new inhale, the ultimate space between.

To lean further into this energy, some practices we recommend include:

Herbal Allies of the Waning and Dark Moon

To better align with the energetics of the Waning Moon, we can also call upon the herbal allies that are reflective of autumnal energy, our turning inward and introspection.

Thank you again for joining us in this series. We have immensely enjoyed gazing at the Moon alongside of you all, and dancing beneath her light. We hope this series helps you live more in alignment and enjoy and celebrate the flow of the lunar cycles.