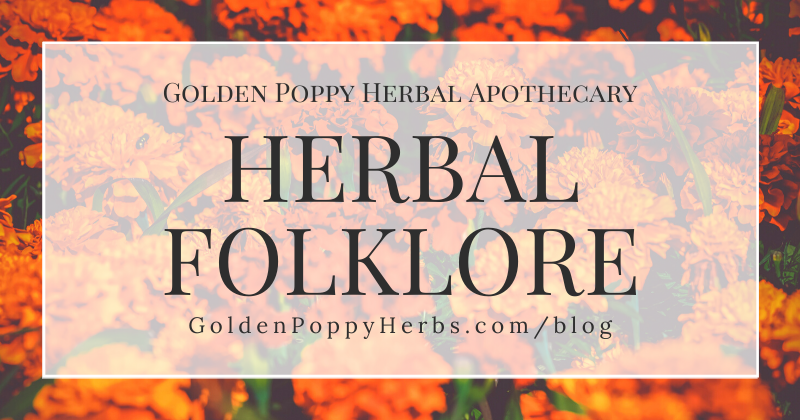 We have been intimately connected to plants for a very long time.

For those who came before us, in cultures and traditions around the world, herbs and plants, much like the rest of the natural world, held a profound amount of wonder and power.

Herbs have a deeply rooted presence in folklore throughout much of history and continue to do so in modern pop culture (we see you Vervain in The Vampire Diaries). As with all forms of lore and mythology, the characters, archetypes, or concepts that are interwoven into them are complex and intriguing.

Plants in folklore have ranged from simple, two-dimensional beings that exist in the shadows and backgrounds of stories, to being tools, to representing symbols or signs ranging from omens to premonitions, or even being personified spirits or an embodiment of the divine. However, each of the ways in which they show up are profound, unique, and special and offers us a way to learn more about both the plants and the culture the lore originated from.

With the arrival of autumn and the falling of leaves comes the sharing of stories, usually around a cozy campfire and with a hot cup of cider in hand. It is around this time that folklore of all kinds tends to experience a revival, with enthusiastic life breathed into it as the world around us prepares for darkness and slumber and the imminent winter to come. More often than not, plants and herbs make an appearance in almost all of these stories.

October brings a great example of this. It is believed in ancient Celtic culture that there is an energetic barrier that separates our physical world from the “Otherside,” where spirits of passed loved ones, and even elementals roam. On the sacred Celtic holiday of Samhain, also known as “All Hallow’s Eve,” or Halloween as we call it today, it is believed that this veil between the worlds is at it’s thinnest. It is believed that those beings on the “Otherside” are able to freely enter our physical plane once again, and passed loved ones can return to visit their family for the night.

However, sometimes evil spirits are believed to be able to cross over as well.

To keep negative entities at bay, the ancient Celtic people would carve menacing faces into turnips, hanging them from doorways and trees around their properties to ward them off and frighten them away, which would allow only positive spirits or passed loved ones to enter their home. Eventually, throughout time, these turnips were traded for pumpkins and became what we know today as the funny-faced jack-o-lanterns that adorn our front porches.

Altars or “ofrendas” are created for each family member that has passed, with food and drinks and gifts left in front of pictures of those that have moved on, reminding us that as long as someone is remembered they never truly die.

The most common plant associated with this holiday is the fragrant Mexican marigold Tagetes erecta, which is said to be the only plant whose smell can cross over into the plane of the dead. Its fragrance helps guide loved one’s spirits across the bridge during the time of year when they can come and visit with family.

This celebration was traditionally held during the month of August, however when Catholic conquistadores arrived in the area, they adopted the tradition into their celebration of All Saints/Souls Day which was celebrated at the beginning of November, and thus the practice that we see now of celebrating alongside Halloween was born.

In the spirit of the traditions of the past we thought it would be fun to explore a few other examples of herbal folklore:

While of course herbal folklore should be appreciated, it should be taken with a grain of salt, and especially not as a basis for reference when determining medicinal use.

For example, European Mandrake was utilized in a tea to help promote fertility in Old World Europe, and there are even mentions of its use for the same purpose in the Hebrew Bible. However, it has been discovered that European mandrake has chemical compounds known as topaine alkaloids, which when ingested can produce horrifying hallucinations. Even more dangerous due to its level of toxicity is the American Mandrake (often substituted for European Mandrake due to it being more accessible), which contains phyllotoxin, that which can result in violent vomiting and diarrhea, or even death as a result of dehydration.

While we can appreciate the stories that are associated with our herbal allies, they should not be relied on without more evidence, and we should take extreme caution and consult trusted, experienced herbalists on proper use.

However, examining the lore associated with an herb can help us understand it more deeply. As mentioned by author Harold Roth, “the more different perspectives you have on a plant, the more you come to understand it in-depth and in truth, and thereby approach its spirit.” Herbal folklore may not always give us accurate insight into the medicinal qualities of a particular herb, it can help clear the foggy window of how our ancestors perceived and interacted with the world around them. Additionally, this helps us to better connect with the very essence of the herb itself, and is yet another way to get to know the herb, and better connect to the plant’s spirit.

We encourage you to find a way to connect in this way to your favorite herb. Look up the stories and folklore associated with them – were they considered magical, or are the stories associated with them more practical? Perhaps they made a cameo as a valiant guardian against dark forces, or perhaps they show up as a nurturing maternal spirit meant to guide and mentor us. Maybe they served as a sacred symbol for ancient gods or goddesses, or maybe they were good luck? What if perhaps your favorite herb signified a fruitful harvest to come? Or what if the herbs we forage in the woods were once thought of as homes for fairies?

We look forward to what you uncover, and we wish you so well as you deepen your relationship with the beautiful beings that have grown around us and touched our lives for centuries upon centuries. We also hope that you share your stories with others around a warm hearthfire, cozy cup of cocoa in hand.