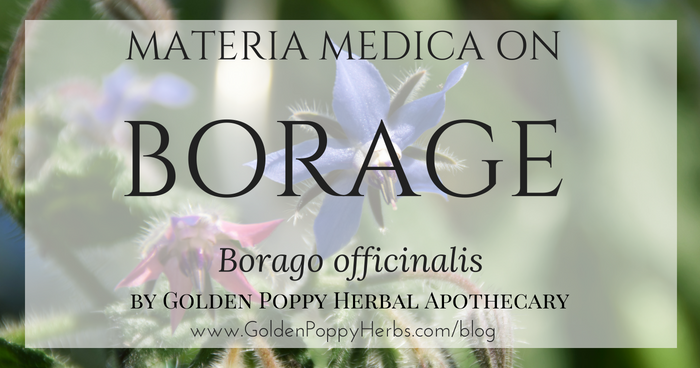 The name of this plant is thought to derive from the Celtic borrach or “courage.”  The flowers have long been used to bolster courage.  In medieval times the flowers were embroidered on the mantles of knights and jousters to bring them courage.  Borage leaves, flowers, and seed oil moisten yin, clear heat, and reduce inflammation.

Thought to originate in Syria, borage is now naturalized throughout most of Europe and the United States. It flourishes as a weed near houses and on rubbish heaps. While many modern gardeners consider it a nuisance, it was traditionally grown in gardens to use as an herb, for its edible flowers, and for its ability to increase the yields of honey.

The plant is easily recognized by its white prickly hairs and its bright blue star-shaped flowers. It grows to about 1-2’ high, with many hollow, almost succulent branching stems. The ovate to lanceolate leaves are 3” long and 1-1/2” wide, growing in an alternate pattern up the stems. The lower leaves are stalked, with stiff one-celled hairs on the upper surface as well as on the veins below. The deep green leaves have sinuous, wavy margins. The inch-wide bright blue star-shaped flowers have prominent black anthers forming a cone in the center. The fruits consist of brownish-black nutlets in groups of four.

Borage, as a flower essence, is for heavy heartedness and lack of confidence when facing challenges. The remedy is said to bring courage to the taker, providing a condition of “buoyancy of the soul”. (Katz and Kaminski 1994) Borage is said to bring “lightness and ebullience to the soul, filling it with optimism and enthusiasm.”

Although they can be cooked eating them raw is not recommended due to the ‘prickles’ it is best not to. Flowers are very tasty and can be tossed into salads or they can be crystallized to make a “candy.” The seeds are a rich source of gamma-linolenic acid; this oil helps to regulate the hormonal systems and lowers blood pressure. An edible blue dye can be obtained from the flowers; some people use it to color vinegar however it turns pink on contact with acids.

Check out this fun recipe for Crystallized Borage: http://www.ediblewildfood.com/crystallized-borage.aspx

Botanical Description: Borage is a bristly plant growing to a height of 1 to 2 ½ feet tall. The stems are round and hollow with prickly white hairs. The juice of the stems is cucumber scented. Borage is an annual, though it self-sows easily with bright blue star-shaped flowers with brown anthers. After pollination the flowers turn pink. It thrives well in poor soil, in full sun to partial shade and is loved by bees. (Mars, 2007)
Key Constituents: